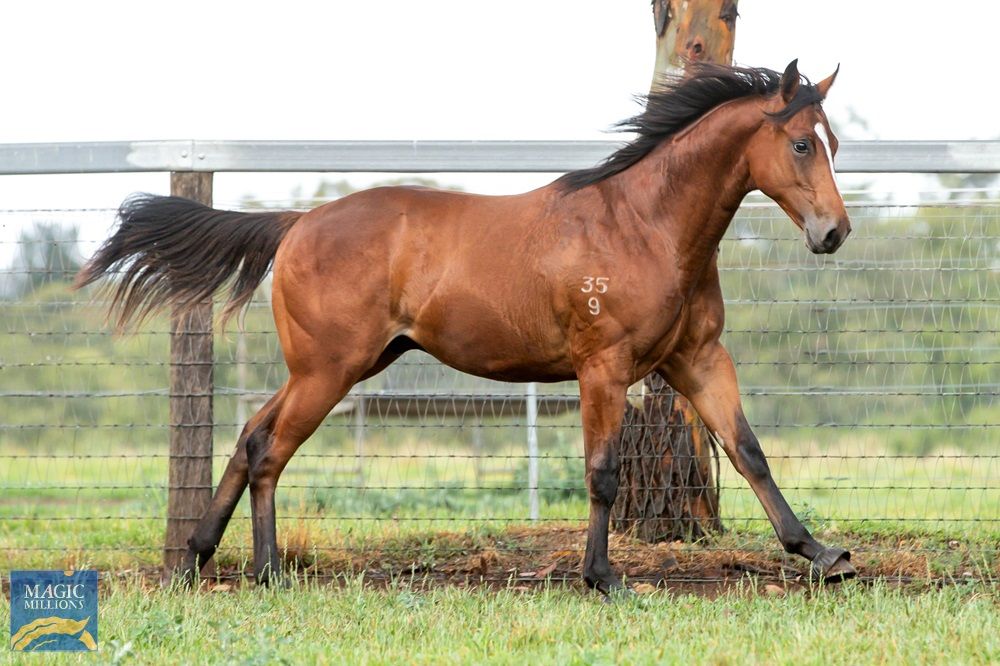 Berava (Pariah) took out heat seven over 650 metres at Deagon, one of two juvenile trials at the session, and the performance was enough to convince McCall to spell the October 31-born colt with the view of attempting to qualify him for the Gold Coast $2 million two-year-old race in January.

And the Sunshine Coast stable’s array of talented young horses does not appear to end with Berava, either, after another two-year-old colt, by fellow Hunter Valley first season sire Hellbent (I Am Invincible), impressed the trainer with a jump-out victory on her home track yesterday.

McCall plans to spell both colts and she has tentatively locked in a plan for Berava, the fifth foal out of Shamrock Slipper (Jet Spur), to target Magic Millions 2YO Classic (RL, 1200m) qualifying races such as the Phelan Ready Stakes (Listed, 1000m) in December.

“He is a really nice, little horse and he’s just kept on improving and improving. He’s a real, readymade two-year-old, so we’re pretty happy with him,” McCall said

“To be honest, he’s a late October foal, nearly a November foal, so we just put him through the system and they normally fall by the wayside and get a bit tired or this and that, but he’s just kept coming on in leaps and bounds.

“He is a really tough little fella, nothing fazes him. He’s very natural, so he hasn’t had to cop a lot of work to get to where he’s at.”

Berava kicked up to hold the lead in the first of two 650-metre juvenile heats to score by a length and a quarter over Mishani Mental (The Mission) and Mishani Embrace (The Mission), who was third.

He was purchased by McCall for $80,000 from last year’s Magic Millions Gold Coast Yearling Sale from the draft of Willow Park Stud who offered him on behalf of breeder Fergus Doyle.

“We had maturity X-rays done last week and he’s probably not where we need him to be to keep going this prep, so he will go straight to the paddock (today), have a little bit of time off and then hopefully we can qualify him for the Millions,” she said.

“He will probably just have a month or so (in the paddock) and then we can bring him back. If he’s not there, he’s not there, but we have to give him his chance (to qualify).”

McCall had success last season with Sacca, a first-crop son of Golden Slipper (Gr 1, 1200m) winner Capitalist (Written Tycoon), who has won twice from seven starts and she believes there are similarities between the sprinter and Berava.

“Obviously they were the first lot of Pariahs to go through (a sale) in January and I went down and had a look through them,” she said.

“Most of them were a bit pricey for us but I really liked this little guy. He was very much in the mould of his father, which I like in a first season stallion, something that really stamps them. He looked like that, he looked like an early sprinting type and his mother raced up here.

“She was a Magic Millions Sprint winner, so I knew her from being trained around the place close to us. I knew she had a fair bit of toe.

“We were looking for something that looked like they would get up and go early and possibly make the race without paying a huge amount of money and he was the one we found.”

Meanwhile, the jump-out-winning unnamed Hellbent colt is the second foal out of Compelling (Onemorenomore), making him a half-brother to Perth-placed juvenile of last season Glacier Miss (Frosted).

He was bought from Glenlogan Park for $50,000 at the Inglis Classic sale while McCall also purchased an I Am Invincible (Invincible Spirit) colt from Glenlogan at the same auction for $150,000 who she also has high hopes for.

He is the second foal out of Soviet Secret (Eavesdropper), a three-time stakes-placed juvenile who was a winner at 1400 metres.

McCall said: “They are both nice horses. The Hellbent has gone straight out and the I Am Invincible has only been in and started a bit of half-pace now, so he is probably a month away from a jump-out.”

Having her second public trial after finishing third at Doomben on August 31, and with apprentice Lilli Barr in the saddle, Mishani Sunshine ran 38.09 seconds for the 650-metre hit-out, 0.55 of a second faster than Berava’s heat.

She defeated stablemates Mishani Warfare (The Mission) by a length and Mishani Persuasion (Heroic Valour) who ran third.

By Tim Rowe
Article as published on ANZ Bloodstock – https://www.anzbloodstocknews.com/magic-millions-on-the-radar-for-mccalls-promising-son-of-pariah/