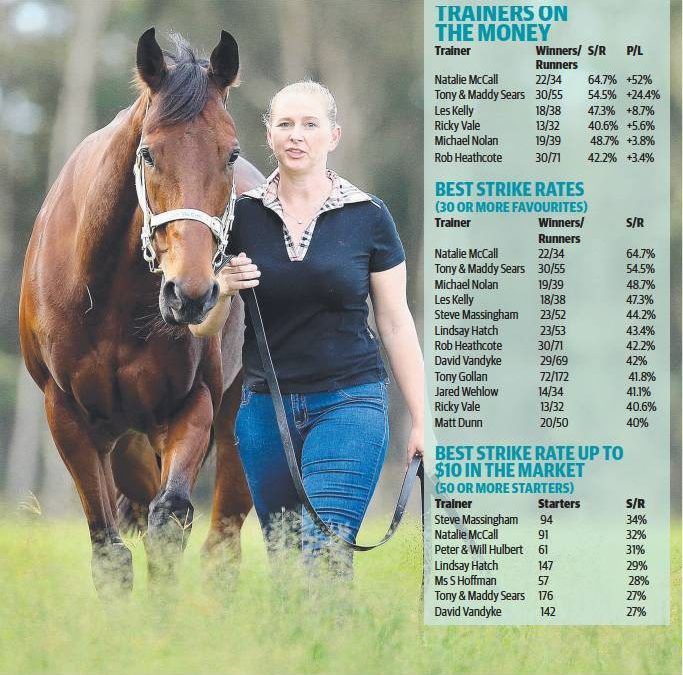 Sunshine Coast trainer Natalie McCall with her 2014 Stradbroke Handicap winner River Lad. McCall has a remarkable strike rate of 65 per cent from the 22 winners out of 34 favourites she has saddled up this season. Picture: Glenn Barnes

LAST week we looked beyond the raw premiership tables to analyse the strike rates and profitability of jockeys in Queensland racing this season. Today it’s the turn of the trainers.

Queensland has been a happy hunting ground for favourite backers in 2019-20, well above the national average, and there’s quite a few stables that have produced profitable figures for punters.

The most notable is the Sunshine Coast’s Natalie McCall, who has quite an astonishing record this season when her runners are sent out the top pick by the punting public.

From 34 favourites the stable has saddled up, McCall has led in 22 winners at the remarkable strike rate of nearly 65 per cent and a profit on turnover (based on flat staking) of more than 50 per cent.

Her figures continue through to those runners up to $10 in the market, where only north Queensland-based Steve Massingham has a better strike rate among trainers to have had 50 or more starters in that bracket of runners.

The Tony and Maddy Sears partnership has been fast out of the blocks, with favourites from that stable striking at 54.5 per cent this season for a 24 per cent profit on turnover.

Michael Nolan and Les Kelly have also been reliable commodities with public elects, with both just under the 50 per cent mark this season.

From the bigger stables, punters have managed to make a profit backing Rob Heathcote-trained favourites this season, with a strike rate of better than 42 per cent, showing a 3.4 per cent profit.

Typically, the biggest stables tend to be ‘over bet’ by the market place, but Tony Gollan’s figures for the season compare more than favourably with leading interstate stables.

He has had 42 per cent of his public elects win, at the relatively minor loss of just 2.7 per cent. Compare that to other big yards like Chris Waller (27% strike rate, 29% loss), Ciaron Maher and David Eustace (37% strike rate, 6% loss) and Lindsay Park (36% strike rate, 8.7% loss) and you can see why punters have seen a bigger number of top picks roll in compared to other states this season.

Overall, Queensland has had the highest percentage of favourites out of any state to win at TAB meetings this season, with almost 37 per cent of them winning, compared to Victoria, which has had just 32.5 per cent.

In summary, there have been 70 stables that have started 10 or more favourites in Queensland this season, 30 of them had strike rates of 40 per cent or higher and 21 per cent of them showed a profit.

Further, there were 35 trainers to have 20 or more favourites and 26 to have 30 or more, of which six showed a profit betting flat staking.