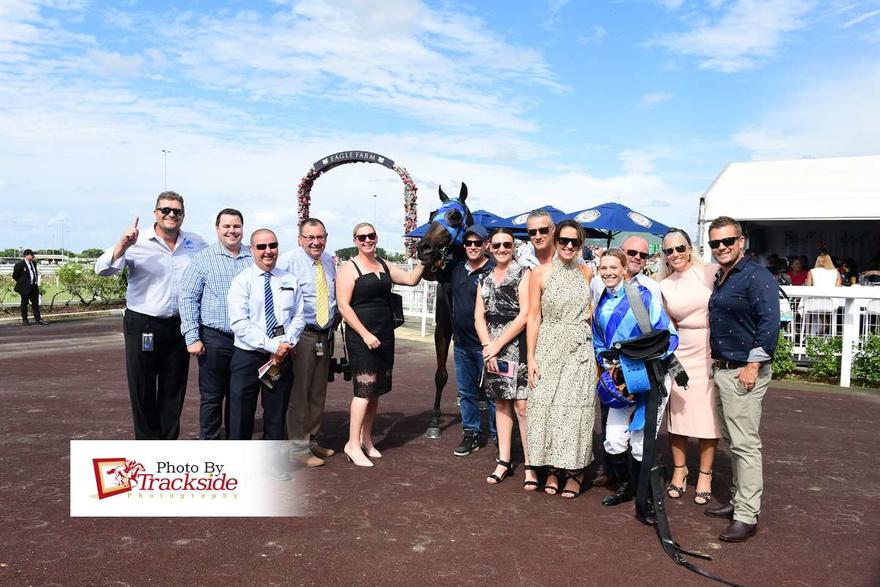 Across the weekend Nat and Team McCall engineered a stunning hattrick of wins from as many starts……..
After a long spell following a tendon injury Epic Rant (Rant) was perfectly placed Friday night to “allow him to find his feet again without too much pressure” according to Nat, instead of the race at Eagle Farm the following day. He found an extra gear when challenged at the 250m mark and was running away from his rivals on the post chasing more distance. “Was really proud of him, he just tries so hard all the time” Nat said.
Saturday saw the return of The Sinner (Roy) as part of his build up to the QTIS Jewel race and the Rockhampton Capricorn carnival in early April, where he completed so strongly in the 2YO race last year starting favourite! From a perfect draw the in form Stephanie Thorton had him right on the heels of the leaders into the straight, and with a quick left hand step he was  punched into the lead and broke his rivals with 50m of rapid acceleration and careered away with the victory. “I am really impressed with how he furnished from his good break and has always had that talent inside of him” Nat gleamed after the race with reporters. “Was a good run first up and quick time from Roy, but he will improve from here”.
Sunday the very much anticipated 2nd race of Platinum Euros (Euro) finally arrived. Many owners had feared he would not recover from an unusual tendon operation, but his recovery had only gone from strength to strength across the past 9 months. Sent out a $1.75 favourite following his slashing victory on debut, Euro seemed to toy with his rivals for the journey. Best described and summarised by race caller Josh Fleming “At the 250m he was still in second gear with Ronnie (Jockey Ronnie Stewart) laying back with his feet on the dashboard like he was out on a Sunday cruise. Then he went go and it was all over in two strides, he has something a little bit special inside”.  Nat was extatic to have him back racing and will plan his preparation from here, hoping his earnings will allow him to look at a couple of potential races across the next month.