THE SINNER ROCKETS INTO 2YO CLASSIC CONTENTION 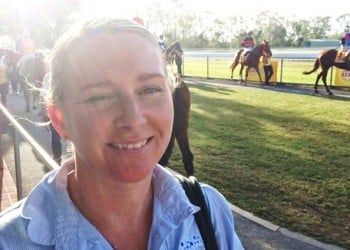 March 21, 2019 By Tony McMahon. THIS year’s $125,000 Capricornia Yearling Sales 2YO Classic (1200m), which was already shaping as the most open on record, has become even more complex to fathom thanks to The Sinner.
Virtually on a week to week basis recently another top CYS Classic prospect has been unearthed but it is doubtful if any of those were as impressive as The Sinner was on debut winning at the Sunshine Coast last Sunday.
Purchased by Sunshine Coast trainer Natalie McCall (pictured), the unusually named The Sinner (b g 2 Better Than Ready-Royalsyn x Royal Academy) was knocked down to her for $13,000 at last years CYS in Rockhampton.
The Sinner looked anything but contrite when he inflicted punishment on his eight rivals with an effortless 3.5 lengths win over 1000 metres at Corbould Park, Caloundra last Sunday.
In winning, The Sinner earned $20,150 for his group of 19 owners and all going well raced himself into contention for the richest race run in Queensland on Saturday April 13, the CYS Classic at Callaghan Park, Rockhampton.
Natalie McCall labelled The Sinner an “exciting prospect” while confessing that he had battled some shin soreness problems this preparation.
“He pulled-up well after his win last Sunday but he has gone out for a week (paddock break) and I won’t push him as he is a pretty nice horse and he is exciting. Provided he comes back well and providing he doesn’t go AWOL he will be coming up to Rocky for the race”, Natalie McCall said.
If that’s the case, The Sinner is likely to be the third of The Better Than Ready breed that will run in Rockhampton’s most prestigious juvenile race.
Brisbane trainer Chris Munce has stamped the Classic as the target for BTR filly Tiger Love while his Roma counterpart Craig Smith has done likewise with Hezhome.
That pair won brilliantly during the last fortnight at the Gold Coast (Tiger Love) and Rockhampton (Hezhome).
Through his win, The Sinner became the 14th individual winner this season for Better Than Ready.
That stallion has three yearlings marketed to be auctioned at the CYS at the Robert Schwarten Pavilion, Rockhampton Showgrounds on Sunday, April 14.
That trio of BTR’s are certain to be in the premium category of the 99 yearlings on offer.
At the Gold Coast Magic Millions March Yearling Sale held last Monday and Tuesday, some 47 BTR yearlings were sold grossing $2.317 million.
The group ranged in price from $17,000 to $170,000 averaging $49,298 which in the main came off a $9900 service fee which is currently under review for the 2019 breeding season commencing in August.
A number of Capricornia Yearling Sales graduates will be racing at today’s THURSDAY Mackay TAB race meeting and also at the Bowen TAB race card on Friday.
Rockhampton owned Lota Creek Gold, one of the best products to emerge from the CYS in recent years will make his night racing debut at Toowoomba tomorrow FRIDAY night.
Through necessity, Lota Creek Gold will contest a $50,000 Class 6 Plate (1300m) which will be run at 8.45pm under lights at Toowoomba’s Clifford Park racecourse.
Gold Coast jockey Jason Taylor will ride Lota Creek Gold for trainer Harold Norman.
Lota Creek Gold (gr g 4 Instinction-Remembering) was to start in a rich Class 6 Plate (1400m) at the Gold Coast last Saturday but the race was a casualty after the latter part of the program was washed out.
“The Toowoomba race is probably too short for him but he just has to start. He is a pretty good horse, probably more than what people think of him”, Norman said.
Two other CQ causalities from the Gold Coast race abandonment last Saturday in The Tax Accountant and Gypsy Toff will go around in the re-run of the $200,000 3YO Jewel (1200m) at Eagle Farm on Saturday.
Both those two horses also went through the Rockhampton sale ring courtesy of the CYS.
Racing heads to Springsure on Saturday for the gala annual St Patrick’s Day races.
Courtesy of callaghanpark.com.au